Are lizards poisonous to cats, dogs or humans?

One of the dilemmas in owning a lizard is that it might be poisonous to you, to your dog or to your cat. Maybe, you are afraid that you will end up in the hospital once a lizard bites you.

Are lizards poisonous to cats, dogs or humans or are lizards being poisonous just a myth?

What is lizard bite poisoning?

Removing the lizards from the animal or human that has been bitten is quite difficult because of the large teeth that they have. Often times, the person goes to the hospital with the lizard's teeth still lingering on his skin.

The same scenario happens to bitten cats or dogs. They are brought to the veterinary clinic with the lizard still enjoying biting them. Chances are high that the lizard's teeth will still remain into the skin even after it has been removed from biting.

There are only two poisonous lizards in the world. These two lizards are known as the Gila monster and the Mexican beaded lizard. These two have an overt venom delivery system with their venom sacs located just at the backside of their lower jaws.

It can easily be treated with a simple first aid. It rarely happens that their venom puts the life at risk and the more that it is not life threatening at all.

These two lizards are living in the deserts of the southwestern United States and northern Mexico. They both spend most of their time staying under the ground.

They only get out of it when they have to eat, to look for a mate, or whenever they feel threatened. They don't usually bite not unless they feel very threatened but when they bite, they forcefully do it and they do not easily let go. The victim will feel a very extreme pain and can even be injured with their bite.

Symptoms of lizard bite poisoning to cats, dogs and humans

The most visible and common symptom of lizard bite to human, dogs, and cats are extreme bleeding and intense pain in the wounded or bitten area. Other symptoms include:

Causes of Lizard Bites to Cats, Dogs or Humans

Perhaps, the most common reason why cats, dogs, or humans are bitten by lizards is due to curiosity. As mentioned a while ago, lizards won't bite not unless they are threatened.

Dogs and cats are very fond of investigating and sniffing that they tend not to notice that they are already sending threats to the lizard. On the other side, the curiosity and too much fondness of humans to hold these lizards causes them to get bitten.

This means that in order to get away from getting bitten even though their bite is not deadly is to get away from these lizards as much as possible. It is also very important that you don’t just let these lizards litter everywhere if you have one in your house. Keep them in their cage and lessen interaction with them.

In order to diagnose if the lizard bite is poisonous, the victim should be brought to the nearest clinic. Right now, there is no affirmative test yet but the doctor may do some common procedures to find out any unlikeable effect of the lizard bite.

Different procedures which include urinalysis, blood analysis, radiographs (x-rays), ultrasound, and an electrocardiogram (EKG) may also be conducted to ensure that you or your dog or cat is safe and sound.

In the case of dogs or cats who have heart issues have been bitten, they may undergo a full cardiac panel. X-rays are usually done in order to find out if there are remaining teeth under the skin.

Like any other sickness or accident, treating it at home is the very first step that you have to do. First things first, remove the lizard away from the victim. In doing this, make sure that the damage will not worsen. The following procedures can be done in order to accomplish this.

In order to do this, insert any long and hard material into the back of the throat of the lizard. Push it hard enough for the lizard to let go.

You can also remove the lizard away from the victim by pouring its mouth or nose with vinegar or alcohol. Use drinking alcohol, not rubbing alcohol which can kill the lizard.

Keep in mind that some lizards are protected by the law and the very last thing that you want to happen is to be jailed due to lizard poisoning or killing.

If the above mentioned methods do not work, the last option that you can do at home is to put a flame under the chin of the lizard or try submerging it in an ice cold water.

If the methods above do not keep the lizard away, bring your dog or cat or bring yourself to the hospital or clinic with the lizard's teeth still lingering into the skin.

Ideally, wash the bitten area thoroughly with running water then apply pressure by pushing it hard or by tying it tightly in order to stop or control the wound from bleeding. Applying ice is not recommended as it might only cause additional damage.

Once that you are in the clinic one hospital, treatment will be based on the symptoms since there is no antivenin available for lizard bite. Intravenous fluids may be administered as well. Medication may also be given to avoid feeling burning pain and antibiotics will also be given to eliminating any harmful bacteria that has been transferred.

The wound will be monitored closely in case of changes occur. You will be asked to stay in the clinic or hospital if the damage is serious but you can go home and continues your medication at home if it is not severe.

Since the venom of lizards is not life-threatening, recovery is fast and treatment is very easy as well. Perhaps, the best way to avoid getting bitten is to get away from them as much as possible.

Generally speaking, house lizards or common lizards are not poisonous to humans, dogs, and cats. Their bite might be painful but there is no harmful side effect at all, aside from getting wounded of course. More often than not, the bitten area will just swell.

These lizards aren't really poisonous but they are carriers of salmonella virus which is transferred through feces. Due to this, utmost care should be observed and avoid direct contact with these lizards in as much as possible as Salmonella can cause serious illness.

It is not also true that lizards make food poisonous. There are people who vomit after taking in food that has been contaminated with a lizard, but the truth is, it is not the lizard who is at fault. The vomiting is a psychological reaction. It is even more acceptable than the vomiting is caused by dust particles brought by lizard which causes gastric irritation. 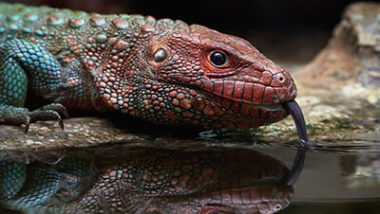 Do lizards need water to survive? 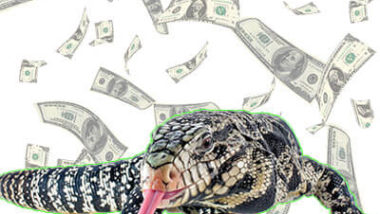 How much does a pet lizard cost?