Chances are you are looking for a pet lizard and want to have a small one, right?

You can get one of the pet lizards that stay small and are cute reptiles...

Some info about the different types of lizards

There are thousands of lizards species as studies show more than 6000 all over the world except Antarctica. From the smallest lizard which is the Brokeesia Micra up to the largest one which is the Komodo dragon.

Lizards can handle cold temperature but usually, almost 80% of them love warmer places such as deserts. Some are dangerous, but others are good to have as a pet.

Why get pet lizards that stay small ?

Small lizards as a pet are much easier to take care of. It is low maintenance compared to the larger type from their shelter you would only need a smaller tank or aquarium rather than getting gallons and gallons of tanks.

It is cheap not only for their shelter but also for their food consumptions since small lizards don’t need to be fed to much. They only eat a little a day compared to larger lizards that would need frequent feeding.

Smaller lizards can easily adapt to its surroundings they can easily be handled and tamed compared to the larger lizard. They are also quiet and entertaining.

Small tank – you can get a small tank or aquarium for your lizard. You can put in approved sand from pet stores since there is a mix of vitamins and minerals that are safe for your lizards in case that they would ingest it. Small lizards love sandy places and it will be easy for you to scoop up their droppings.

Foliage – you can also put small branches of trees or logs since lizards love to swing and jump on branches. Small lizards also like to rest and eat the leaves.

Although there are a lot of small lizards species that you can have as a pet, here is a list of some smaller lizards that are very popular.

1. Brokeesia Micra – the brookesia Micra is the smallest living lizard in the world it is only one inch from nose to tail. It is originated in Madagascar and has a short orange tail and a very small body. It likes to stay in trees and its branches.

2. Phelsuma – is one of the smallest lizards among the lizard species they are usually known as the day geckos because it sleeps during the night and is very active during the day. You would know a day gecko because of its colors that are from the contrast of red, blue and green. It doesn’t have eyelids and it has dark rounded eyes. It can only grow up to 30 cm in length. The phelsuma eats insects, nectar from flowers, and fruits.

3. Anoles - anoles is also one of the smallest lizards among its species. It is a small lizard that has a slender body. He has a long head and ridges between its eyes and nostrils. It can always be seen in the ground or hiding in branches or trunks. The anoles likes to eat insects like grasshoppers, flies, and, spiders. It is also very territorial and can be aggressive.

4. Polychrotidae - It also came from a family of small lizards that is rare. It is very unique because of its appearance. It's usually green and brown but sometimes it also adjusts its colors based on the temperature. It loves climbing trees as well and feeds on the spider and some insects.

5. Corytophanidae – It came from the iguana family, It is a small lizard that has a compressed body. it is easy to identify such lizard because it has a well-developed head crest which looks like a helmet. It is very fast moving but it can be easily captured because unlike other lizards, it has a hard time dropping off their tail.

6.  Chameleon - chameleon is a very popular lizard because it can easily change its colors and can camouflage to the environment. The chameleon loves hunting for its food and usually eats insects and its long tongue helps with that. It likes climbing and loves to stay in warm surroundings.

7. Common collared lizard – this lizard is just 25 cm in length and males are larger than females. It is called collared lizard because of its black collars around its neck. It has small scales and its colors contrast in brown, green, blue, and yellow. It also has dark spots and loves to stay in rocky terrains.

8. Tree lizard – tree lizard is very small, It is only two and a half inch in size and it also comes from a variety of colors like black, brown and gray. It has a thin body and a rusty tail. You would know if it is an adult tree lizard because of its blue-green belly. It also has scales in the middle of its back. The female is determined by the color of its throat that is white, orange, or yellow. From its name itself the tree lizard loves climbing and staying on trees, it eats insects such as mosquitoes or spiders.

9. Horned lizard – there are a lot of horned lizards about 10 in species. This lizard originated in deserts, it has long round-tailed horns and can grow up to 5 inches. It has a flat belly like of the frogs. And you would easily identify it because of its head and scales from head to tail. It likes sandy areas and it also eats insects and nectars of cactus flowers.

10. Sand lizard – Is is the small type of lizard with wedge shape head and smooth scales. It also has crescent bars on its belly. It came from the fringe-toed lizard family and it likes to stay in sandy areas. It likes to eat insects and even smaller lizards.

11. Gekkonidae – this lizard came from the family of geckos. It is very colorful and small. It loves to climb in every kind of surface. You can identify a gekkonidae by the unique sound that it produces. This kind of geckos has no eyelids and it doesn't blink. Just like other lizards, it cleans its own eyes using its tongue. It loves warm climates and likes to eat insects.

12. Plated lizard – plated lizard makes an excellent pet. It is very docile, easy to handle, and you can definitely tame it. It is very small and can be seen in pet shops. It's a rare lizard and it is unique because of its exotic look. It can easily adapt to its surroundings and likes to eat insects and plants.

13. Opluridae – there are a lot of species under the opluridae family. This lizard originated in Madagascar, it is also known because of its colorful bright scales. It looks like iguanas and it is also has collared necks. It loves to eat insects and flowers. Opluridae is considered rare already and hard to find.

14. Night lizard – It is very small because it can only grow up to 12 cm long. It likes hiding inside trees, rocks, etc. This lizard has a flat head and body and its eyes are similar to the snakes'.

15. Skink – It is small and can be very territorial and dangerous. It can bite you and some skinks have venoms. It has an elongated body and its legs are very small. You can hardly see this lizard. It doesn't have limbs at all. It likes to dig and burrow down the ground and likes to eat crickets, caterpillars, and, beetles.

16. Leposoma Rugiceps – It has very small limbs like the skinks. It's so small that you barely can't even see it. It can be found in the deserts, mountains, and rainforest of America that is where it originated. It also likes to eat insects.

17. Flying lizard – this species belongs to the genus Draco. It originated in Asia and it likes going from one tree to another that is why it is called the flying lizard. It loves jumping from branches to branches and it spreads its membranes to use it as its wings.

18. Green crested lizard – this lizard can usually be found in tropical places. It is originated in Asia and looks like the skink lizard. It has a small body type and it can also change its color depending on the temperature. It loves jumping from one branch to another just like the flying lizards.

And that's the end of the pet lizards that stay small.

I hope you liked this information, and please share it with your friends... 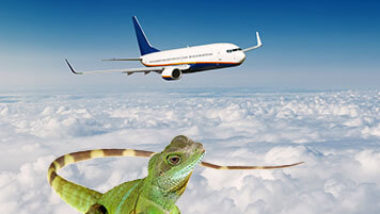 Can you bring a pet lizard on a plane? 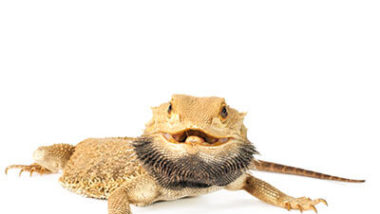 Bearded dragon lizards as pets (Facts you need to know)